Service Above Self – Frances Dixon Part 2

Adopt a Village in Guatemala, has just celebrated 30 years, which is a long time for a nonprofit organization 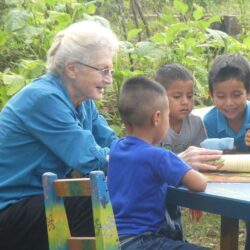 Voices of Rotary
Service Above Self - Frances Dixon Part 2

A podcast by Emily Francona

These are stories of service above self. Rotary’s highest honor, recognizes individuals, who personify rotaries motto, service, above self by volunteering their time and talents in exceptional service to others. It is awarded annually by Rotary International based on nominations from District Governor’s. Only a maximum of 150 nominations worldwide are considered no more than one per district and even fewer are actually selected each year. Since rotary is recognized worldwide as a service organization active in local and international communities, how individuals dedicate to service above self are making a difference in people’s lives, are uplifting stories of interest and an inspiration to others.

This is part of a series bringing you stories about people of action, who put service above self to make a difference. Frances Dixon was recognized with this, very special, rotary award as a true Agent of Change at the virtual District celebration in September, 2020. Frances, welcome to the voices of rotary where we share stories of service with fellow Rotarians and members of the community.

So Adopt a Village in Guatemala, has just celebrated 30 years, which is a long time for a nonprofit organization to remain active and relevant and make a difference in such a poor area.

This service to Mayan children and their families, that Adopt the village in Guatemala, has rendered over the last 30 years. Now looking back and more importantly, looking forward, What are your hopes for them? Let’s say for the next decade and beyond that.

What I am, what I am seeing is much, has been established the infrastructure of our plans, our visions, Our dreams is actually there. We have, we have schools. They’re built. We have teachers some, excellent teachers. Teachers that we’ve taken great pains to provide training, to bring them to a point where they can give quality education to the kids, To encourage them to see the bigger picture, the real need of what a teacher is. That it’s just not a teacher salary and you show up maybe when you feel like it. But to really dig in and be part of this change for future. The future lives of these kids.

And that’s, that’s their. That’s established. So what I am seeing for instance, for the next decade is that we build on that. And how do we build on that? Well, right off the bat, I would say one avenue is to bring in the mix incorporate technology. Technology in that area in education is virtually unknown. It almost does not exist. In the first place, you can’t get an internet signal in those villages. So the schools don’t have any Internet. In the second place, the Guatemalan government decrees that if a school, like a middle school, is going to have computers it’s up to the parents to purchase them. Well, the parents for the most part our subsistence farmers. And to be honest, they can’t even feed their kids half the time. But no, they are responsible for buying computers for the kids in the school.

So what that means is that there’s a scramble to find old, used, maybe reconditioned computers that don’t last anytime at all. And there’s no one to service them, no, no one to keep them going. Once they kind of like, run out of steam. Well, then they’re just packed away in some storage area and it’s is back to point one. So to repeat. The technology is, is practically zero. So what does that really mean for kids going into the future?

We all know that the world has changed and is changing every single day. And if indigenous kids can’t have any ability or training or learning in the computer field, where does that leave them?

I strongly believe that technology has got to be part and parcel of the training so that kids can move along in life and have a better future. So we have instituted that whole concept of technology and particularly since covid began. That actually has been a tremendous turning point in, in this style of education that we’re giving. Because we’ve had to go virtual, just like everybody in the world has, but we’ve had some difficulties that in many places, don’t exist. For instance, going to a village, no internet. Go into a village, no electricity. How can you manage a virtual learning program under those conditions?

We’ve had to innovate. We’ve had to scramble. We’ve had to pull out all stops. What does that mean? Okay, for instance. Yes, the smartphone is, is your major tool for virtual learning. But how do you charge it if there’s no electricity. Okay. So we take a look at that. What do you know about their solar chargers? Are there to be purchased. So we get solar chargers to the kids and they can charge up their phone.

But then what? So we provide computer tablets, of course, they need to be charged. Well that solved. We’ve got the solar charger. But what about an internet signal? Now there you can get just stopped cold.

Now the interesting thing about that region and it is very, very mountainous, internet towers have been built all throughout those mountains and it’s possible to get a signal if you’re in the right place or close enough to the tower you can get a signal, but that’s iffy. And in fact, when we began our virtual program, these kids were hiking through the mountains virtually looking for a signal.

However, just recently, we’ve been able to bring in Internet boosters. We’ve taken them into the villages. We’ve tested them out in every single case. 100 percent of cases, kids have been able to connect through that booster. This is revolutionary. This Is not happening anywhere in Guatemala. This is first time, this is groundbreaking for our organization.

And the fact that we have teachers who are willing and wanting to move into technology and use it for the benefits for the kids has been key in the success that that we are experiencing right now. And you ask me about the next 10 years. Emily. I would say that we’re going to see more and more and more of this and we’re going to have more families parents and kids excited and they are, they’re tremendously excited. Nobody else in the village, has the system going that we do. And the news is spreading and I think this is going to be Paramount and seeing a change in education for the children that we are helping.

Help us tell your stories. Leave us a note and let us know what story you want to tell